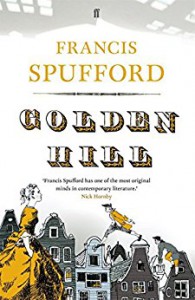 Thanks to Net Galley and to Faber & Faber for offering me an ARC copy of this novel that I freely chose to review.

I had an interesting experience with this novel. In the last few weeks, every time I reviewed a novel that was nominated for an award and checked out what novel had won it, it was Golden Hill (among them, the Costa First Novel Award, The Desmond Elliott Prize, the RSL Ondaatje Prize 2017…) and I thought I had to read it and find out what the fuss what about.

It is not difficult to see why people are fascinated by this novel. It is a historical fiction novel by an author who has written non-fiction extensively and has chosen a very interesting narrative style. (I must confess to being very intrigued by his book called The Child that Books Built. A Life in Reading, especially in view of a recent discussion we had on my blog about books on reading). The story is set in the New York of the late 1740s and is narrated by an anonymous narrator (or so it seems as we read) who tells the story of a man, Richard Smith, who arrives in the New World with a money order for 1000 pounds and acts quite mysteriously. The story is told in the third person, but the narrator breaks the third wall barrier often, at times to despair at being unable to describe a card game, or a fight, at others to decide where we can or cannot enter. Although the book’s language and style are word-perfect (and will enchant those who love accuracy), it appears more sensitive to certain aspects of the society of the time than perhaps a novel of the period would have been (slavery, gender, and race issues…) but the narrating style reminds us of Henry and Sarah Fielding, and in a nod to metafiction, in the book itself there are discussions of novels that include Joseph Andrews or David Simple. I have talked often about my fascination for narrators and this is one of those novels that will keep it alive for a long time.

The book transports the reader to the New York of 1747, a provincial and small place, with only a few streets and a mixture of inhabitants mostly from Dutch and English origins, with a jumble of different coins and bank notes in circulation, what appear to be the equivalent of small-town politics and an interesting judicial system, and dependent on ships from London for news and entertainment. Although I have read historical tracts and fiction from the era, I don’t think any of them managed to give me as good an understanding and a feel for what colonial New York was like.

The story itself is built around the mystery of Smith’s character. Who is he? Is the money order real, or is he a con-man? Is he a magician, an actor, a seducer, a trouble-maker, all of the above? Everybody wants him, or better, his money, for their own goals (political, financial…) and he allows himself to be courted by all, although he is only really interested in the daughter of one of the Dutch businessmen who is holding his money order until they receive confirmation of its true value, Tabitha. Tabitha is my favourite character, a shrew, sharp and witty, and somebody I wouldn’t mind learning much more about.

Smith is a good stand-in for the reader because although he is from the era, he is naïve as to the colonies and the different social mores, politics, and customs there, and keeps getting into trouble. Although his adventures are interesting, and the mystery that surrounds him seemingly propels the story (although half-way through the novel we get a clue as to what might be behind the intrigue), I found it difficult to fully empathise with him, perhaps because of the style of narration (although the story is told by a narrator, and in the third person, at times we get a clear look at what Smith is thinking, but, for me, the hidden information somehow hindered my full investment in the character). There are many other interesting characters, although we do not get to know any of them in a lot of detail. For a great insight into the book and all that it contains, I recommend you read the About the author note I have included above. The man can write, for sure.

The ending… Well, there is an ending to the story and then there is a final twist. If you picked up the clues, the ending will not be such a big surprise. The twist… Yes, it makes one look at the book in a completely different way, although it makes perfect sense.

I highlighted many fragments that I particularly liked, but on checking them again I was worried they might, either give too much away or confuse somebody who is not following the story. So I’d advise you to check the book sample available on your favourite online bookstore and see if you enjoy the style. If you do, it only gets better.

I recommend this book to anybody curious about its reputation, to lovers of historical fiction, in particular, those set up in the colonies prior to the revolution, and to readers and writers who enjoy narrators and look for something a bit different.