Not only for tennis lovers. A gripping story, of single-mindedness, determination, hard-work and love for the game. 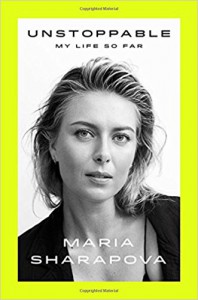 Thanks to NetGalley and to Penguin UK for offering me an ARC copy of this book that I freely chose to review.

I am not a big tennis fan. I was when I was much younger, for a number of years, but then most of the players I followed moved on, I was busy with other things, and although I’ve watched the odd match here and there, I don’t follow it closely any longer. When NetGalley suggested this book and I read the comments I was intrigued. And, from my reading experience, I’d say you don’t need to be a big tennis fan to enjoy this book, although I suspect it might be quite a different experience for those who love tennis more than I do.

Maria (Masha) Sharapova’s autobiography is the story of her rise to success (not quite a rag to riches story, but not far from it either), and one that stresses the importance of hard-work, determination, and single-mindedness. And yes, she does talk about the doping and the ban too. In fact, the book starts briefly with that and then goes back to the very beginning, when she started hitting balls with her father, Yuri, when she was four. The way she talks about hitting a ball and how it makes her feel calm and in control reminded me of meditation techniques. The adventures of little Maria (nobody could pronounce her Russian name in the USA) and her father once he decides she must train in the United States to become the best in the world are horrifying at times and they seem to have often been lucky coming across people who helped them for no reason at all (although perhaps seeing a little girl and her strange father lost in America might have moved people to offer some assistance).

Maria’s writing style is very matter-of-fact and she does not delve on feelings or personal matters too much. (Yes, she does talk about her life, she talks about her mother trying to get to America, and mention that she would talk to her on the phone once a week, but she does not elaborate on how she felt spending years away from her, other than to say how much better she felt when she finally joined them and reflection on the fact that you don’t realise how much you’ve missed somebody until you are reunited with them. Interestingly enough, in her acknowledgments, she thanks her mother first). She mentions friends every so often, but she’s very clear that she’s never wanted to make friends with anybody in the tennis circuit as that would have interfered with her performance when she faced them on the court. This seems to have been her attitude from very early on, and she reflects on how even when she was a pupil at a tennis academy she knew these girls would end up being her opponents in the future. She finds it impossible to believe that other players might have real friends in the tennis world, and it is difficult to know if she cannot believe anybody could see things differently, or perhaps she closed off her emotions to protect herself from a very young age and although it has helped her get where she wanted, there was a price to be paid. (She does write about being the odd one out in the tennis academy, having nothing, living hand-to-mouth and also about her wonder and amazement when she was invited to a big house for the first time. Yes, she talks about a tough life and it is not surprising she wanted to win and make things better).

There isn’t a lot of gossip either. She does talk about other tennis players, but mostly about the characteristics of their game and what that meant for her. Some of her descriptions are funny, bordering on the unkind, and she is very observant, at least when it comes to tennis. She does talk about a couple of boyfriends and some early crushes, but you won’t learn much about her romantic life from this book (it seems she’s been far too busy with her career, and she makes some interesting comments about genre and men finding it difficult to not be the most important thing in a woman’s life, that are hardly surprising but help give an insight into the life of female elite athletes). And then, she talks about Serena Williams. I’ve read quite a few reviews that comment on her attitude towards Serena. As mentioned above, I wonder if she sometimes ascribes to other people her own motivations. I am sure Serena was surprised and upset when she beat her at Wimbledon when she was only seventeen, but their record since has been pretty impressive for Serena (she’s won 17 out of the 19 matches they have played) and I’m sure Maria must have thought about this long and hard. I suspect if you’re a big fan of Serena Williams you might take issue with this book, but I think she’s trying to make sense of the results of their confrontations and to find some justification that does not involve only their respective playing styles.

The book is very good at illustrating what it takes to get to the top, even if you have the talent, how hard it is, and also, how difficult it is to remain there. As these elite athletes must start at a very young age, it is not only the individuals who work hard but also their parents. What effect that has on the child is a good question, and one without an easy answer. The writing style is conversational and one gets the feeling that this is probably how Maria writes and talks (she does quote from her diary at times). A word of warning. There are some swear words scattered around the pages, although I did not find it excessive (but I’ve read reviews mentioning it, so I guess I’m not as shockable as others).

I found it a compelling read, especially the early part of the book, and very difficult to put down. A fascinating story that makes for a great read, even if you’re not big tennis fans, and an intriguing woman I’m sure we’ll keep hearing about.

Some quotes from the book. (No spoiler, but the last one is the ending of the book).

Anyone can be composed and cool while winning, when everything is going according to plan. But how do you deal with a losing streak? That’s the big question —that’s what separates the professionals from the cautionary tales.

Because no one can be great every day. Can you get it done on the ugly days, when you feel like garbage and the tank is empty? That’s the question.

That’s how it has to be when you get a little older. You need to go twice as hard to look half as natural. You need to double your effort to get the same result. In other words, practice is everything.

Before all this happened I was thinking only about the finish line. How it would end, how I would make my exit. But I don’t think about that anymore. Now I think only about playing. As long as I can. As hard as I can. Until they take down the nets. Until they burn my rackets. Until they stop me…

From checking some of the reviews I’m aware the paper copies of the book include some pictures, but the ARC copy I got didn’t, so I can’t comment on those. Ah, I almost forgot, she believes in retail therapy as the answer to upsets and problems. Just in case you were wondering.