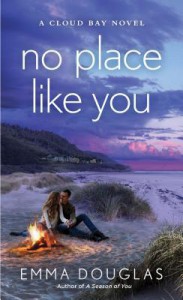 Thanks to NetGalley and to St. Martin’s Press for providing me an ARC copy of this novel that I freely chose to review.

Although I am not a big reader of romance, this novel is an example of what I think is a subgenre of it, the romance that takes place in the world of music and musicians. The setting of the novel is a small imaginary American island called Cloud Bay, off the coast of California, best known for a music festival and for being home to the musicians of a well-known band and their families. Grey Harper, the singer and leader of the band, passed away a few years back, and his family members and associates have been keeping the music festival and the studio going, quite successfully, but although the business is going well, their personal lives have seen a fair amount of turmoil.

The story centres on the second generation of the family, on Zach, Grey’s son, and Leah, a good friend of his sister Faith, and daughter of the sound engineer of the band. She also does sound engineering and producing now, and has had a crush on Zach since they were teenagers, and they have a bit of a history together. Their professional and personal lives get entangled in a way that seems impossible to avoid in Cloud Bay, and no matter how determined they are not to allow things to get complicated, they do.

The author manages to create a good sense of place and of the strange and slightly incestuous relationships that happen in such a setting, where everybody knows everybody and nobody can step outside of the house without somebody knowing about it. Nothing is private and the actions of one person have far-reaching consequences. I particularly enjoyed the exchanges between the female friends (Faith and Leah in particular) and the wedding preparations (Leah is due to get married after the festival, at the end of the summer), as their friendship is portrayed in an easy and natural way and the way they support and care for each other is heart-warming and feels real. Those and other elements of the novel reminded me of a chick-flick (there are plenty of cakes, pastry, and ice-creams as well) but the fact that half of the story is told from the point of view of Zach gives it a different emphasis.

As for the romance, although both of the characters are gorgeous, as is to be expected, this is not a love-at-first-sight story, as Leah and Zach know each other and have a bit of a history (however brief) together. I found it interesting that their behaviour at times goes counter to the traditionally expected male and female roles, as Leah is the one to initiate their relationship (both in the past and now), and she is the one to suggest a no-strings-attached sexual relationship, while he initially resists (although his resistance doesn’t last long). I don’t think you need to be an eager reader of romance novels to suspect how things are going to go from the beginning, and although there are some twists and turns, there are no major surprises. There is sex, but it is not very explicit (described in a lyrical and poetic manner), and although I do not like erotica or sex scenes, as I feel they slow the action, I don’t think many readers would feel offended by it (but I would not class it as “sweet” or “clean” either). The ending… I think romance readers will enjoy it, and there is a hook to keep people coming to read the next novel, although it is a side-story not directly related to the romance.

The story is told in the third-person from the alternating points of view of Leah and Zach. This is not always separated into chapters, but the transitions are clear and not confusing. As mentioned above, the division between the characters is not down to standard gender roles, and they both seem to behave more in keeping with their characters and their history (that we get snippets of thanks to their conversations and memories throughout the book) than with traditional male or female roles. There is a moment of crisis towards the end of the book, and I felt that the novel’s pace grew faster at that point, while until then it had moved steadily. I realised later that this is the third book in the series (for some reason I thought it was the first) so I am not sure how well it fits in with the whole series, although I had no difficulty following the novel (but I imagine the background story would increase the expectations and enjoyment). I must admit that I did not think there was much depth to the characters and they seemed to act younger than they were (Leah had been married, and Mina, Zach and Leah’s sister, is a widow), but perhaps they have developed slowly and it is unfair to judge them by the events in a single book. Leah is a fairly rounded and sympathetic character, and I felt she behaved in a consistent manner, although I was not as convinced about Zach, who has much to atone for.

The music business background will be of interest to those who enjoy that genre, and the descriptions of the way the characters feel about music are inspiring, but it is not as detailed or technical as to interfere with the enjoyment of readers of other types of romance.

In sum, a romance set in the background of the rock music business and in a lovely setting, which will be enjoyed by lovers of the genre and followers of the series, but with few surprises for the rest of readers.