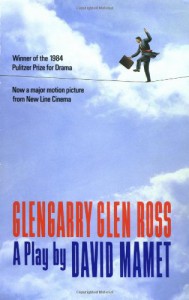 I wrote my PhD on the films of David Mamet and I've read most of his plays (I haven't caught up with his most recent ones though). Glengarry Glen Ross is a great play. It has the well-known fast-paced dialogue of Mamet's plays (including the "f" word used very often) and a collection of characters that are also in his best tradition, either loosers, no-hopers, con-men or has-beens. It is all men and it tells a great deal about cut-throat business world and competition. Salesmen, liars and thiefs, meet together in a play that although it does not have the dramatic depth of 'Death of a Salesman' is as good a reflection of its era and the America of that time as 'Death' is of the 40s.
If you become familiar with the play it is impossible not to quote from it. Great film version also. I have watched 3 different versions of the play, and although very different, I've loved them all.
Tweet