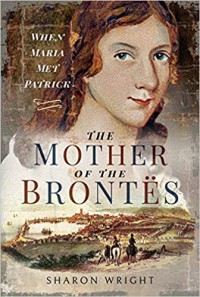 Thanks to Rosie Croft from Pen & Sword for sending me an early hardback copy of this book, which I freely chose to review.

Despite being a fan of the Brontës, having visited Haworth, and read about them (although I’m no expert), on seeing this book I realised I didn’t know much about their mother, other than she had died when they were very young. The author explains quite well why that is the case, as there seems to be very little trace of her, other than some letters she wrote to her then husband-to-be, Patrick, and a religious tract she wrote. There are also comments and memories collected by others, mostly by those writing the biographies of her famous daughters, but little dedicated solely to her. I am grateful to the author for putting that to rights. She has done a great job, digging factual information about Maria Branwell, compiling written records (be it newspaper cuttings, diaries written by neighbours or social connections, correspondence and accounts by others), introducing and interpreting the few writings we have by Maria herself, and pulling together information about the era and the places where the family lived to help readers place the family as actors and social beings in the period and the locations where they lived.  The level of detail is just right, as well. Wright explains how dangerous and dreary the trip from Penzance to Yorkshire would have been in the early XIX century, the unrest in Yorkshire due to the Industrial Revolution and the machines replacing workers (the Luddites had much to say about that, although their actions didn’t have any long-term impact), and the differences in the social settings of Penzance and Thornton, for example, but these explanations never detract from the story. Rather the opposite; they make it all the more compelling.

I don’t want to go into too much detail and spoil the enjoyment of the many interested readers, but I thought I’d share some of the things I noted as I went along. I’ve already mentioned that Maria was from Penzance, but it seems that her father and the rest of the family were likely involved in smuggling (that, to be fair, seems to have been an almost universal occupation in the area). Hers was a large family, and to illustrate just how hard life was at the time, although they were fairly well off, five of her siblings died before they got to adulthood. Religion played an important part in her life, and it’s only fitting that she would end up marrying a priest. She knew Humphry Davy (later Sir Humphry Davy) when she was young, her life was quite full and she was well-connected in Penzance, so we get a sense of how much she must have loved her husband to sacrifice all that to follow him in his career moves, and also what a change in her circumstances she must have experienced. She was a keen reader, and their love of books was one of the things likely to bring her and Patrick together, and it is clear from her letters that she was a good (and even passionate at times) writer, with a sense of humour. She was a woman of her time, and although she had the confidence of those around her, she wished for a life-long companion to support her and guide her in accordance to the norms of the time and as we can see from her own religious tract, her ideas (or at least those she expressed in writing for the public) were pretty conventional. I was gripped by the difficulties Patrick had to face to get the post as priest in Haworth. It seems they were not fond of being told what to do or who to choose there, and he renounced twice to his position before everybody was finally in agreement with his nomination.

I was fascinated by the comments of the author about women’s diarists and their importance to get to understand what everyday life was like at the time. Men of the period wrote the official history, but they hardly ever took the time to note the little details, those we are truly interested in, that help us bring to life a particular era. I am particularly fond of the entries from the diary of Elizabeth Firth, one of the Brontës’ neighbours. My favourite must be: “We sat up expecting the Radicals.” For your peace of mind I’ll let you know that it seems they never came. Wright also defends the importance of the local press, as again they are the ones that keep records of those things that are not considered notice-worthy by big publications, but help make a community what it is. She laments the demise of many of those papers, and I could not agree more.

The book includes two appendixes with the full text of Maria’s letters and also her religious article titled “The Advantages of Poverty in Religious Concerns.” There is also an index with all the texts the author has consulted when writing this book, and I am sure people interested in learning more about the Brontës will find plenty of material there. There are also a number of illustrations, mostly photographs from the houses and locations mentioned in the book, some portraits and illustration, and also a recreation of what Patrick and Maria might have looked like on their wedding day (that I loved).

I recommend this book to anybody interested in the Brontës, in the history of Haworth and Thornton, and in the history of the early XIX century England, especially those who, like me, enjoy getting transported to the era and having a sense of what life was really like then. A deserved homage to a woman whose heritage was so important and so little acknowledged.