Compelling, both living up to and challenging the tropes of the slasher genre. 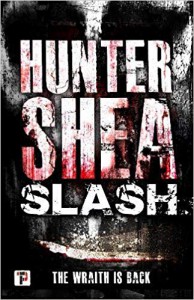 Thanks to NetGalley and to Flame Tree Press for providing me an early ARC copy of this book that I freely chose to review.

I recently read one of Hunter Shea’s books, Creature, that I really enjoyed, and this novel shares quite a few characteristics with that one. I find it a bit difficult to sum up exactly what I think about it, but I’d say it is a book that both indulges in and challenges the usual tropes of the slasher subgenre, while digging dipper into some of the characters’ backgrounds and emotions. Yes, there is a monster (with a horrific past and a number of paranormal characteristics), there is a group of friends (more or less) in a creepy location, there is plenty of action (especially in the second half of the book), there is gore by the bucket load, and some dark humour. But the first part of the book looks into survivor’s guilt and grief, and it might feel slow to readers expecting a standard slasher novel, and the second part might prove too heavy for those interested in psychological horror but not so much in bloody mess and body parts galore.

The book is narrated in the third person, mostly from Todd’s point of view, although we are shown some other characters’ perspectives at the beginning and the end of the book. Through Todd, we get a fair amount of background information into what happened to Ashley, his fiancée, a final girl proper. There is much discussion about her final girl status, and I particularly enjoyed that aspect of the book, and also the exploration of Ash’s and Todd’s state of mind and difficulties coming to term with what had happened to them. Todd clings to Ash’s memory, and it makes perfect sense that he would want to hold on to her and explore any clues she has left for him, especially in his disturbed frame of mind. He continually wavers between trying to avoid putting others at risk and his need to keep on looking for any vestiges of his girlfriend.

We don’t know so much about the rest of the members of the team that end up joining the mission. One of them, Sharon, the sister of one of Ash’s friends, is not welcomed by most, and she is treated rather badly, especially by Jerry, the policeman, who is far from likeable. As is typical of the genre, the other characters are reduced to their habitual behaviours and salient characteristics (we have a gambler who is forever quoting odds, the friend who always tries to avoid conflict, Todd’s closest friends are a couple devoted to each other…). None of them are particularly sympathetic (perhaps also due to the somewhat distanced and obsessive point of view provided by Todd), but then, you don’t want to get attached to the characters in a slasher novel or film, as you know what will likely happen to them. I did like Sharon, who kicks ass, but I wasn’t sure about the depiction of women in the book. Again, the book tries to balance genre expectations and challenges, but I’m not sure it always works. We have Heather, Vince’s wife, who seems to play the part of the woman in old-fashioned films and books. She is the carer, looks after everybody, worries about Todd and her husband, spends a fair amount of the second part of the book unconscious and being carried around, and… (no, no more spoilers). Sharon, on the other hand, is a tough chick, determined, and courageous, sometimes too hot-headed for her own good, and she is an exotic dancer (or a stripper, as Jerry insists in calling her). As I said, I liked Sharon, but I didn’t appreciate the abuse she has to put up with, some of the jokes, and would have liked to know more about her, and not just the little snippets we get. We meet Ash when she has been torn out by her experience, and it’s difficult to get a full sense of her.

I’ve read reviews decrying plot holes (I wondered about quite a few things as well, but this genre is not about fine plotting, in general), others complaining about the ending and the explanation behind the murderer/monster (I agree with reviewers that compared the book to a series-B movie, particularly when it comes to the action and the paranormal elements), and emphasising their lack of empathy for most of the characters. I agree with all these points, although they seem typical of the genre, rather than problems specific to this book per se.

For me, the main strength of the novel —apart from the psychological aspects, the exploration of grief and survivor’s guilt, and the wonderful setting (that, as tends to be the case in horror novels, becomes another character)— is Shea’s writing. He writes beautifully and compellingly, making it impossible to stop reading even when he is describing horrific and vivid scenes of carnage and violence.

I’d recommend this book to readers who enjoy horror books and love genre tropes but want a bit more depth and appreciate a challenge. This is a book full of horrific scenes graphically rendered, with a murderer/monster with paranormal features, and some of the characters are prejudiced and misogynistic, so I wouldn’t recommend it to people who prefer their horror more low-key and insidious rather than in your face. I have become a fan of Shea’s writing style and look forward to reading more of his books.