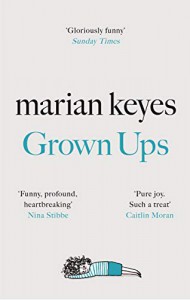 Thanks to NetGalley and to Penguin UK-Michael Joseph for providing me an ARC copy of this novel that I freely chose to review.

Marian Keyes is a very well-known and popular Irish author, but this is the first novel of hers I read and therefore I can’t compare it to her previous novels. Based on reviews, some readers feel that it is less tight and less funny than some of her other books, but not everybody agrees. I’ll leave it to her fans to make their own minds up.

This novel is the story of a family, well, or of the families of three Irish brothers, John, Ed and Liam Casey, their wives and children. It is a family saga of sorts, although it does not cover several generations of the same family. I must confess that when I read the description I thought this would be the story of what happened when Cara, due to her concussion, started spilling the beans about everything and everybody, and how that would evolve. But Keyes uses that point in the story as the introduction to the characters, and then goes back in time, to a few months earlier, so we learn the reasons behind some of the secrets she reveals, and we also learn a lot about the characters. A lot. This is a very long book, and at first the timeline can seem confusing because of the initial scene, but once we go back in time, the novel progresses in a chronological order (not perfect, because often the characters will remember their past, how the couples met, or details of their previous lives, and those will be interspersed with the actual events), up to the point where it catches up with the birthday celebration dinner for Johnny (quite late in the book), and then moves forward until the end of the novel. We learn about each couple and each individual (at least the adults, not so much the children), although we learn more about the women than about the men: we learn about Jessie’s role in organising family events, inviting everybody and keeping the family together; we read about Cara, who is eminently practical and loves hotels but lacks in confidence in other areas and suffers from a very unhealthy relationship with food (that develops into a full blown bulimia); we read about Nell, the newcomer to the family, an unconventional theatre designer whom everybody loves despite (or perhaps because) of her unique style; and about the brothers:  Johnny, who married the widow of his best friend and is at times overwhelmed by his wife’s need to control and organise and by the legacy of her previous marriage; Ed, who is the kindest and more supportive of the three; and Liam, who seems attractive, light and fun to begin with but  things aren’t always as they seem. Ferdia, Jessie’s son from her first marriage, is a young man who changes enormously through the novel. Oh, and he is a hunk, as we are reminded quite often.

As you can imagine from the description, the book delves into secrets, family relationships (these three families are very enmeshed and that explains some of the bizarre happenings), the nature of love, trust, confidence, self-worth, how relationships change over the years, there is an important subplot about body image and bulimia (very well done, in my opinion), parenting…  There are also funny/dreadful murder-mystery parties, luxury hotels, alternative festivals, romance (with some age difference)… This is not a page turner in the sense of a plot moved by action and suspense. It is more like a soap opera where the lives of the characters ebb and flow, with some peaks of excitement, triumphs and disappointments.

I have mentioned the main characters, although there are many others, including the younger children, friends, work colleagues, staff at the different places where they spend time, collaborators, and although some of the secondary characters are quite memorable, and I didn’t dislike the main characters either (apart from one, but no spoilers), I can’t say I connected with any of them in particular. I liked Nell, Cara (her struggle with bulimia is one of the most realistic and best written parts of the book for me), and Ed, but I didn’t feel personally invested in their stories, although I kept reading, and it’s a long book, so that is saying something.

The story is narrated in the third person from the alternating point of view of the main characters, especially the females, but we also get snippets of what the men think at times. The change in point of view can take place sometimes within the same chapter (several of the characters can meet at an event, for example, and the point of view will then follow someone else), but I didn’t find it confusing, as they are all very different, and we quickly learn to tell them apart.

Keyes writing flows well, and she can easily pass from describing an interior, to making readers share in the state of mind and distress of one of her characters, and although she touches on serious subjects, her writing is not over dramatic or heavy. There are some light scenes, but the book is far from funny overall, although there are moments where the wit of the writer shines through (as I said, some of her habitual readers complained about the novel not being as funny as some of her previous ones, and I wouldn’t recommend it if you’re looking for a laugh-out-loud read). I very much enjoyed the Irish expressions and some of the dialogue sparkled, showing the talent and range of the author. As a little taster, here I leave you with a snippet of a conversation between Jessie and an analyst who is helping her decide how to move her business forward. He is “slightly” creepy.

‘…And the thing is, the thing, Karl that I have just remembered—‘

‘Is that I have a very sexy, non-repulsive husband.’

‘Forty minutes ago you could “never forgive him”.’

‘Time is a great healer.’

The passage is witty but it also illustrates how contradictory we can all be, and there is plenty of that in the novel.

Everything is resolved in the end, and although I think some situations dragged a bit, overall I enjoyed the ending and it fulfilled my expectations.

In sum, this is a book I’d recommend to readers who love stories about big families, especially set in Ireland, who aren’t looking for a lot of laughs, or for diverse characters, and who don’t mind spending a long time with a book. I did wonder if this book wouldn’t have worked better as a collection, with individual volumes being dedicated to each one of the families (I think that at least some of the books, for example the one dedicated to Cara and Ed, would have been stronger), and a tighter edit might also have turned it into a more manageable book for the general public, but I have no doubt that Marian Keyes can write compelling characters, and I’ll check some more of her work in the future. Ah, there are some very mild sex scenes (at least very mild for me, and I don’t like erotica), in case somebody is looking for a totally clean book.